There are images that stop time, making it eternal. This is what only music, a work of art, a construction or a legend can do. Rome, in this sense, is the ultimate expression of the eternity of a monument. This is the case, for example, of the secrets of the Pantheon, one of the most visited icons in Rome.

But what are the secrets of the Pantheon? A place of such importance, in fact, hides stories inside.

In this case, it is not only its size that creates awe, but the harmony of all that weight, lightened by the touch of immortality assumed by its history, its location and its presence.

Located just steps from Piazza Navona and Via del Corso, the building is a container of legends, curiosities and unsolved mysteries. As many photographs manage to capture, the niche at the top of the dome creates a mystical passageway to the sky. From that point, the light filters creating suggestive trajectories, difficult to tell and interpret, if not contemplating in first person the event that occurs.

The secrets of the Pantheon, what are they?

Built by Agrippa in the distant 27 BC, it suffered extensive damage during a fire that broke out in the city. One of the many of that historical period, which frequently struck the current capital of Italy.

Instead, it was the Emperor Hadrian who promoted its reconstruction, which was carried out in the form that has survived to the present day, inaugurating it approximately between 125 and 128. Famous and solemn, the great pronao consists of 16 columns of splendid gray and pink granite, both from Egypt, in addition, of course, to the majestic dome that dominates the circular structure.

Let’s start with the curiosities, we will reveal all the secrets of the Pantheon: 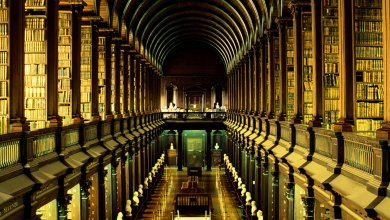 The 5 most beautiful libraries in the world